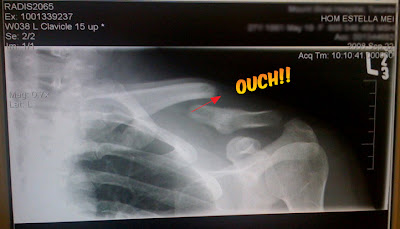 You never know what life will throw your way.
After a great weekend of kettlebell workouts, yoga, rollerblading, and hanging out on the beach, I had the misfortune of breaking my left clavicle (collarbone) on Labour Day, which pretty much marked the end of summer for me.

So how’d this all go down? September 1, 2008, 9:15pm. I was 15km into my ride, going about my usual 35km route, cycling downhill on the Lakeshore Boulevard bike path. I noticed that the city had just installed some new posts going across the bike path. ‘Ok, no problem. I’ll just go around it.’ I steered onto the grassy area and as was getting back onto the main path, I misjudged the curb and came flying off my bike accompanied by a couple of small flips, so I was told. I took a major blow to my left shoulder and had broke my left clavicle. I also had huge road rash on my left shoulder and elbow. It was very bloody and gross. Not fun. It all just happened so fast.

Some of the cyclists passing by asked ‘Are you ok?’, ‘do you need help?’ Even a guy working at the yacht club offered to help. I was riding with friend and trainer Ryan Shanahan. He told me not to move, helped me up, and cleared my bike off the path. Can you move your arm? I don’t think so. The pain was so great that as i tried moving it, all i could hear were a thousand little cracks. This was not a good sign. I knew something wasn’t right, so i tried to immobilize it as much as possible. Other than that, i was ok and able to stand up and walk. Thank goodness I didn’t break anything else or scrape up my legs! I was really lucky. As I was standing and talking, everything started to blur and I was overcome by this dizzy feeling, so I laid down on the grass for a few minutes until the feeling faded.

We walked back up to the top of the hill, Googled the taxi number on the iPhone and called a taxi to drive us and our bikes back. My bike was still intact – in fact i don’t think it took any damage at all. With the accident replaying in my head in slow motion and me trying to keep my shoulder still, the cab ride back was smooth and got me home pretty quick. I got home, paid the driver, grabbed my health card, and got my mom to quickly drive me to the hospital.

At the emergency room, I immediately got my wound cleaned up (which stung like crazy!) and bandaged by one of the nurses – now that’s what i call fast service! I told my story, filled out some forms, waited about 5 minutes, saw a doctor, answered some questions, got my tetanus shot, got xrayed, waited some more, was told that i fractured my collarbone, given a sling and painkiller prescription, paid, then I was out the door. All of which took a total of 2 hours. If you ever get to an accident like this, make sure you ask the extent of the fracture, and look at the xrays. Unfortunately I didn’t get to and was misinformed of the severity of the fracture.

One of the most painful thoughts was not being able to workout. How am i supposed to sit still and not do anything?? Now that’s pain! I was told that within 6-8 weeks I will be able to return to my normal activities. Until then, I would have to lay off the kettlebells and create alternative means of maintaining fitness and my sanity.

What’s next? Time to rebuild.

Week 1
During the first week, I was off work, in a lot of pain, popping painkillers every few hours, icing the area, watching tv, and getting lots of rest. Aside from the one time i got dizzy and passed out in the hallway, the side effects of the painkillers were non existent. I was in a sling for the whole week and unable to move my arm without feeling pain. Even riding in the car was painful to the point of tears. I was pretty much using one arm for everything including typing and every task would take me 3x as long to complete, so I was never actually bored. Other than being slightly handicapped, I had a good week of relaxing, being waited on, and I even wrote a couple of design project proposals for some exciting new jobs.

Supplements: My supplements included Caltrate 2000mg calcium tablets and New Zealand whey protein powder mixed with oatmeal or in my fruit shakes. I highly recommend these as they are great for rebuilding and strengthening the muscles and bones. I felt it helped speed up my recovery. The real key here is to eat a healthy diet that will help optimize the body’s ability to absorb calcium. Here’s a useful page i found on nutrition’s role in healing bones:

Week 2
I was feeling a lot better and had to return back to work. Instead of the excruciating pain, it was more of a piercing pain everytime i moved my arm. I began taking my sling off just to get some movement back in my left arm again. The ‘Use it or lose it’ paradigm holds so true here and the stiffness in my elbow was proof of what 1 week of inactivity can do. That was fixed by doing unweighted bicep curls for a couple of days 🙂 Getting dressed proved to be the most challenging part of having a broken clavicle. You have to keep the injured arm as still as possible while putting your head and other arm through the shirt.

At this point i was able to move my arm out to the side 45 degrees. Forward/backward movement is very limited. It felt good to be out of the sling and getting some movement in my arm. I used it mostly when went out – prevents my shoulder from shifting too much and people from bumping into me.

Week 3
I’m off the painkillers, can extend my left arm out to the side for the full 90 degrees, 45 degrees forward and back and even behind my back. Good news is that I can now walk long distances without pain – which means I can begin doing some more cardio again! I went for a follow up appointment and was told the bone was beginning to heal on its own – hence my ability to move my arm again. I finally got to see my xray too and it was not pretty. The broken bone was completely displaced! My ortho doc said surgery is an option and that the bone can also heal on its own but would just take a long time. Well, i wasn’t too keen on the surgery, actually terrified. Midway through our conversation, i practically passed out (not sure what happened there…emotion overload maybe?)…After that, the doc said we can wait til the next appointment to see if the bone heals then decide what to do.

Week 4
This week I begin physio, an essential step towards rehabilitation.

I went to see Ian Murray, an Athletic Therapist at the Toronto Film Studios. With over 10 years experience traveling and working as the Senior Tour Therapist with Cirque du Soleil’s various productions of “Quidam”, “Saltimbanco”, and “Alegria”, rehabilitating several professional athletes, and celebrities, he understood my needs as an athlete. He told me that muscle tightness, especially from a trauma like this is a form of protection in the body. They tend to tighten up in order to stabilize the joints. By employing body biomechanic and Muscle Activation Techniques (MAT), this helps ‘turn on’ the muscles in the surrounding area to restore movement, correct muscle imbalances, and reduce pain and risk of injury in the long run. To rebuild strength and maintain my muscle mass, he also has me doing isometric exercises. I’ve only been doing physio for a week but i’m already starting to feel the difference!

If you fall off a bike the best thing is to get right back on it so that’s what I did! I set up the CycleOps stationary trainer for my bike so from this point on, that’ll be my form of cardio.

I will write more progress updates as I recover.

For now I’m hanging tough. No crying over broken bones… I’m doing everything in my power to get back to where I was at before the accident and vow to rebuild and come back even stronger!

Be careful out there,
Estella